The Faceoff: Kiosks vs. Tablets in HR and Health Care

The choice between a tablet and a full-size kiosk comes down to the purpose for which it will be used.

Although kiosk technology is becoming commonplace in a variety of verticals, areas where it has had a particular impact include both human resources and health care.

On the human resources side, many companies are placing job application kiosks in retail stores or other highly trafficked areas, allowing them to recruit workers around the clock without having to staff a hiring booth. In addition, a kiosk in the break room or other employee area allows workers to check schedules and payroll information, request days off or make changes to their personnel file.

For health care providers, a waiting room kiosk allows patients to fill out forms or make payments on their account, taking some of the burden off the front desk staff. A kiosk in a pharmacy can perform functions ranging from blood pressure checks to telehealth consultations, while a kiosk in a hospital setting lets doctors easily check a patient record, submit prescriptions for medications or schedule tests.

With the advent of tablet computers, the kiosk arena is becoming populated with units that feature a tablet at their core as well as units built from the ground up. When considering the addition of a kiosk network to supplement the HR department or modernize a health care facility, which is the better option? A full-fledged kiosk, or a tablet-based model?

The choice between a tablet and kiosk 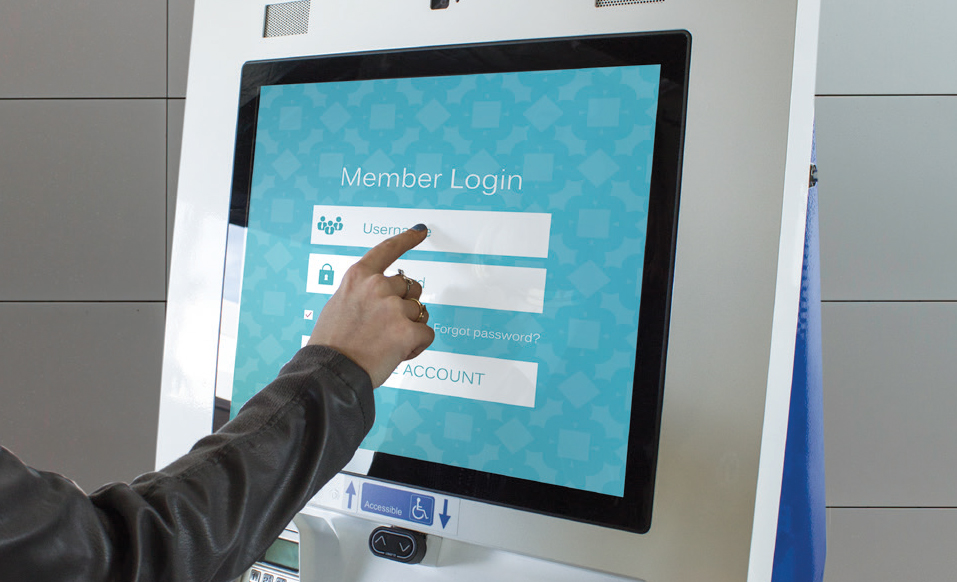 Of course, like many things in the business world (and life in general) the answer is “it all depends.” Both have their advantages and drawbacks.
Factors to consider when choosing between a full-fledged kiosk and a tablet-based model is the function the unit is expected to perform, the space available and the number of people expected to use the device. One of the biggest factors to consider is the deployer’s budget.

“The cost is low so placing multiple units becomes very easy,” Olea said. “Tablets can have one device hardwire-powered, and their built-in cameras can be coaxed into performing functions such as reading ID cards or barcodes.”

Olea Kiosks offers a complete line of tablet and full-size kiosks. Its tabletline can be mounted on a tabletop, a wall or on a freestanding mount, and units come with a card reader. On the full-size kiosk side, Olea offers several models specifically designed for the HR and health care spaces; its Verona model is the only pushbutton height-adjustable kiosk on the market. The units can be raised or lowered by 10 inches at the push of a button, making them easily accessible by a person of any height or ability.

The relative simplicity of a tablet can keep maintenance costs to a minimum. The ability to detach a tablet from its mount opens up additional opportunities, allowing a job applicant to take the device to their seat to fill out forms or giving doctors the ability to sit with patients and map out treatment plans.

On the down side, though, the ability to detach a tablet from its mount does create a greater risk of damage or theft. Some tablet management software systems leverage the unit’s GPS functionality to send an alert text or email if the device is taken outside a predefined area.

Full size kiosks, on the other hand, will cost more than a tablet kiosk but can do everything a tablet-based kiosk can do and more. Additional processing power can make it easier to implement advanced features such as telehealth services or one-on-one conferencing with the corporate HR department.

Although kiosks are certainly larger and take up a bit more space, the footprint of a freestanding tablet kiosk is only slightly smaller than a traditional kiosk, making space considerations a relatively minor concern.
“If you want to create more of a presence for your check-in area, a few full-sized kiosks lined up is often all that is required,” Olea said. “Also, a full-size kiosk can come equipped with more devices if needed like card scanners, barcode readers, printers and keyboards.”

The choice between a tablet and a full-size kiosk comes down to the purpose for which it will be used.

One area of concern that can influence the choice of kiosk is compliance with privacy regulations in handling personal information. This can be particularly relevant in a health care facility, where running afoul of the Health Insurance Portability and Accountability Act (HIPAA) can result in fines running into the hundreds or thousands of dollars.

An advantage that a kiosk has over a tablet is that things like privacy filters can be embedded between the touch glass and the LCD screen, Olea said. “On a tablet, anything you do would have to be on the screen surface itself and is very easily damaged and picked off,” he said. “Also, kiosks can feature printers with a retract function so if a patient does not take their print out the printer can retract the print and deposit it inside of the kiosk for safe disposal later.”

Still, there are privacy screens that can be incorporated into tablet kiosks to help protect user privacy.

Whichever route a deployer chooses, of critical importance will be compliance with the Americans with Disabilities Act. It’s in that area that full-size kiosks may have an edge. Full size kiosks can include headphone jacks with volume control and easily connect with external devices such as Braille keyboards or the Nav-Pad, a device that allows someone with impaired vision, restricted mobility or limited fine motor skills to use the kiosk through a series of highly tactile buttons and audio prompts.
The larger and brighter screens of a traditional kiosk also aid in the ADA compliance for self-service devices.

“ADA is becoming a major concern here in California and we suspect it will become much more of an issue in other states as kiosks become more commonplace in the healthcare and HR fields,” Olea said.

“No longer can you get away with a kiosk just being ‘reachable’,” he said. “Most companies will say their products are ADA compliant, but they fail to mention they’ve only covered a very small spectrum of individuals with disabilities. Sure, someone in a wheelchair can reach the screen, but serving people with disabilities goes far beyond that.”

At the end of the day, the best way to provide a self-service solution that is accessible by all types of users, is compliant with privacy rules and helps improve operations for the deployer is to work with an experienced kiosk vendor who is well-versed in the ever-changing regulatory environment. Olea Kiosks stands ready to help.